Your browser does not support the video tag. Use for example vlc to play the video: http://deathstar.puscii.nl:8000/camera.ogv

Fotos of the demonstration 7 feb 2015, Amsterdam. On saturday februari 7 asylumseekers united in We Are Here organized a demonstration to and on the Museumplein. Refugees, citizens of Amsterdam and more than 40 organisations speak out for adequate day and nightshelter. Every human has a right to a future. Denied asylumseekers cannot claim this right. By the present policy (12 hour shelter, bath, bread and bed) refugees are forced to wander the streets in the daytime.

This is a video of the No Border bus tour on December 13 2014 along two Apartheid Walls (Zeist and Rotterdam) in the Netherlands. 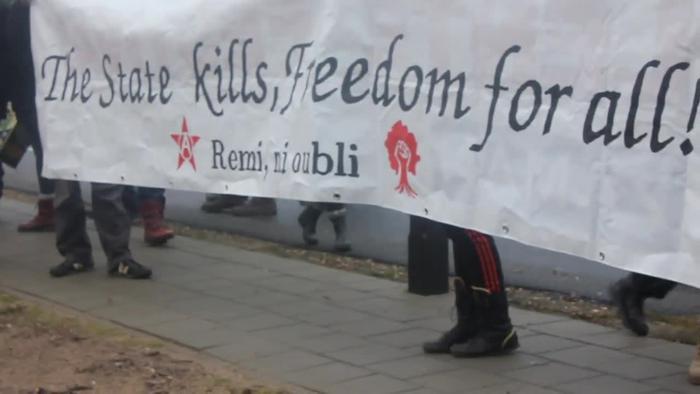 Skouries is the name of a open-pit and underground gold-mining project in the peninsula of Halkidiki, Greece. The exploiter of the mine, Hellas Gold, (owned for 95% by Eldorado Gold, a Canadian mining company who acquired the mine in 2011) is now at the stage of development, and the mine is due to open in 2016. Due to its destructive nature, residents of the area have been showing resistance to the project since its plans were announced in 2006, but have not succeeded in stopping the project.

On Sunday May 6th 2012 the Dutch No Border Network organizes noise demonstrations at several detention centers in the Randstad. Despite many protests both from inside and outside the Netherlands the Dutch government still has the absurd idea that refugees need to be locked up. From the very moment that migrants arrive in our country they run the enormous risk of being locked up in one of the so called foreigners detention centers: this also still applies for families and children.